Created in 1924, the multinational German brand Adidas arrived on the skateboard market only 80 years later with four new shoes released for the occasion. They also signed legends Mark Gonzales and Denis Busenitz in their roster.

A big miss at first. The skateboard branch of Adidas started gaining recognition among riders in 06 when they introduced the first Adidas Busenitz pro model, which became a best-seller.

Adidas makes great skateboarding shoes as long as you stay away from the entry-price models and the sneakers. Pick from the traditional and pro models. They’re definitely worth their price for the protection and endurance they offer.

Praised for their thick sole and their blue Adiprene insole, Adidas skate shoes divide skaters because of their roughness and lack of flexibility at first.

I’ve ridden most of the staple versions of Adidas Shoes. Thus, I will give my non-biased opinion on the whole skateboarding catalogue of the three-stripes brand.

Since 2006, Adidas commercialized over 20 different skateboarding shoes. Many of which have seen different iterations and re-releases. Here are the three most skate-friendly models the German brand has released.

As mentioned earlier, Dennis Busenitz’s pro-shoe gave a tremendous boost of credibility to Adidas in the skateboarding world. Undisputed legend of the discipline, Dennis’ shoe wears as smooth as he skates. That’s exactly why the shoe is still a colossal success nowadays and had over 20 iterations in its 15 years of existence.

The shoe features a grippy cup sole, which is thick yet flexible. The reinforced suede contour makes you feel like riding on clouts. I might exaggerate a bit, but I had a great time with these shoes in my early days as a skater.

Lucas Puig is a French skater notorious for his style. Both on his board, with his wide variety of tricks, and with his outfit, always wearing slim shorts and Helas caps. His style combines authority and delicacy at the same time. The same goes for his pro shoe.

It offers an incredible performance. The sole is probably the most distinct feature of the shoe which goes up to the heel. It offers the best protection across all Adidas skate shoes. Its ghillie system provides your laces from ripping too easily.

The Campus Vulc has been around for a while and for good reason. It comes in full suede and distinguish itself with its low cut design and three apparent stripes. The shoe is super durable because of its reinforced rubber heel cup, and its double stitches on the ollie area.

It’s my go-to Adidas shoes. Affordable if you buy them directly in Adidas stores, yet as resistant as the pro models. If you’re looking for a cheap skateboarding shoe, that could definitely be the one. I’d recommend wearing them for at least a week before riding them. They might be stiff at first.

Not all Adidas shoes tolerate the stresses of skateboarding. Many of their sneakers—or other sport shoes—won’t sustain its practice. Because of their curved soles, or because of the inadequate materials (fabric or leather) that won’t hold long against your grip tape.

Don’t worry though. Adidas finally figured it out and released skate-friendly models of your favorite sneakers.

The Superstar is another best-seller of Adidas. Even though Adidas didn’t design the shoe for skateboarding. They seem to do the job very well, despite the leather contour. Considering that even Adidas sponsored ride them when they could have chosen from the entire catalogue.

If you want better performance and have the budget, I’d recommend the collab shoe Adidas made with Thrasher Magazine. Fully black with shades of red, the Adidas X Thrasher Superstar has a suede curve and comes with the praised Adiprene insole everyone talks about. All-in-all, an excellent choice.

Historically, the Stan Smith was a tennis shoe. But not with the same name. Launched in 1965, Adidas called it after the #1 tennis player at the time Robert Haillet. Adidas rebranded the shoe in 1978 and chose Stan Smith, a famous American tennis player, to take up the torch.

The Stan Smith ADV models are reinforced version of the Stan Smith specifically designed for skateboarding. Although, the shoes come in both suede and leather. I recommend sticking with suede. Other than that, you have all the comfort and style of the original Stan Smith.

With a similar design to the New Era, the Adidas 3MC appears way more resistant than its Vans counterpart. The shoe has double layers of suede on the contour, metal eyelets, and vulcanized Hex-Flex sole to minimize vibration.

If you love the style of the New Era, you can finally ride a similar shoe that won’t rip after 2 sessions. Now Adidas released models in fabric and other in suede. Chose the latter if you want to skate with them. From what I’ve seen, though, they aren’t the most durable skate shoes because of how thin they are. Style over comfort in this case. 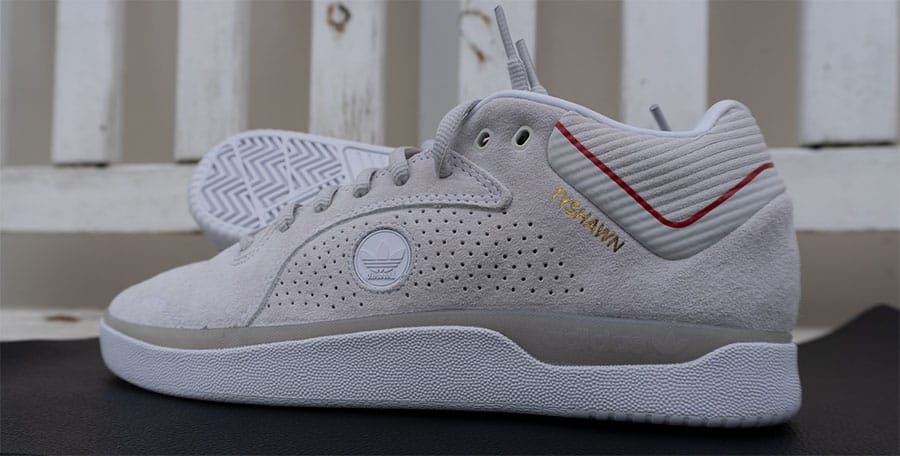 The Adidas 3ST has a rather uncommon design. It comes in two by-product, the 3ST.003 and the 3ST.004. The 3ST.003 has a weird looking reinforced padding on the flick area that looks like they glued it last minute on the shoe. It also has a net on the heel side, which is not so great for skateboarding, if you ask me.

The Adidas 3ST.004 is the real deal for skating. With its double insole and full suede contour, the shoe last long and protects your feet. Even better, the S shape on the heel makes sure your feet stay in place. A solid choice; even if it costs its price.

The Matchbreak is a classic of Adidas’ Catalogue. The shoe looks like a thinner version of the Busenitz. Although, it also comes in mid with reinforced padding.

Some come with suede on the toe side of the shoe and leather on the heel side. Unless you don’t plan on doing heel flip tricks, pick an all-suede model for an overall more resistant shoe.

Mark Suciu is the definition of style. His pro shoe doesn’t make an exception. Launched in 2015, the shoe has a slick and thin design. Comparable to the Matchcourt, the Suciu ADV distinguishes itself with its thick rubber sole and higher heel to preserve your Achilles tendon.

The noticeable blue Adiprene Insole totally sells the shoe for me. Definitely one of the best stock insoles ever commercialized.

How Good are Adidas Shoe Soles?

Adidas has the funds to invest in research and innovation. Hence why, they’ve developed many patented technologies for their soles across the years. Some have missed, some praised for their comfort and flexibility. Nowadays, most skaters will admit that the sole is super comfy. Maybe a bit too much.

See, Adidas soles polarize skaters as they’re significantly thicker than most skate shoes. This makes it great for protecting your feet from impact and vibration, but you lose some board-feel and sensation. That’s the reason I stay away from Adidas shoes. 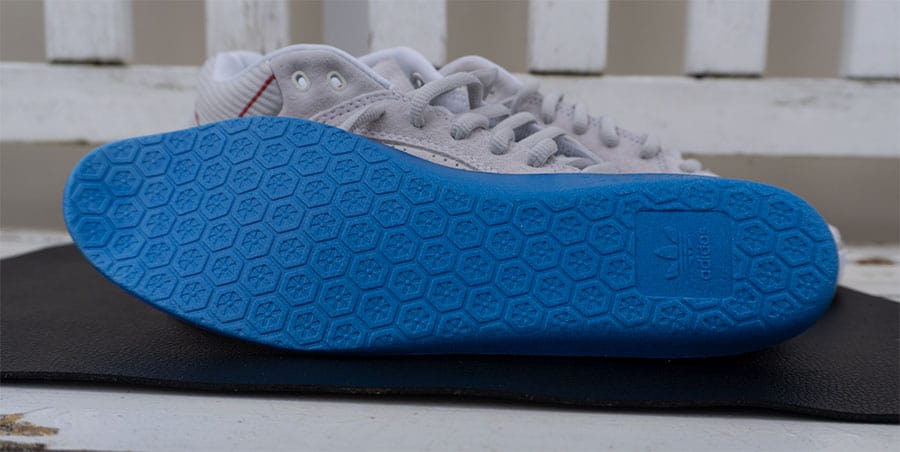 Both the pro models and the Adidas traditional skateboard line comes with insoles specifically designed for skateboarding. Special mention to the Adiprene Insole that comes with some pairs like the Suciu and the Superstars.

Coupled with the thick sole, you won’t even feel anything when landing primo. Although, it has a rubber plating on top, which some riders dislike because of its grippiness. It makes your socks stick to the insole.

If you want to ride the entry-price models you’d find in most Adidas Stores’ skateboarding section, make sure you swap the insoles for some proper one. They’re as thin as paper, no cap.

You can expect your average Adidas shoe to last you 2 to 3 months of intense skateboarding. Like most skate shoes, holes will first appear on the flick areas, toe and heel side, depending on the tricks you do the most.

I’ve had many friends complaining about ripping the bottom of the sole first. If you have the habit of tingling your feet before doing tricks, take that into consideration before buying a pair of Adidas.

Adidas makes some great skateboarding shoes. Overall, they’re durable, protective, and super comfortable. This comes with the disadvantage of having to trade some flexibility and ankle freedom. If you’re willing to accept that, Adidas shoes are an excellent choice for both beginner and advanced skaters.

Like for the Nike SB, you can find some of your favorites Adidas skate shoes for half the price if you look for them in Adidas retail stores. I’ve had some great luck by the past finding Vulc and Busenitz models for less than 50 bucks.

I’ve probably snapped at least 150 skateboard decks across my unimpressive skating career. Some have lasted months, even a year, while some barely made it one full session before giving...