Whether you’re a tall guy, heavy boned or a bit overweight, skateboarding is always an option. If you’re a bit on the heavy side, you probably need a bit of a different setup. No worries I’m here to help. In general, you just need a bit of a wider board, good quality trucks, and bushings that can handle your weight.

The best skateboard setup for heavy riders should consist of the following components:

That’s basically all there’s to it but let’s dive a bit into the why and how. There are a couple of deck brands and technologies to choose from so let’s see what’s out there currently.

Note: this page contains links that earn me a commission at no additional cost to you.

I used to skate 7.5 to 7.75 decks back in the day, anything beyond that seemed ludicrous. Nowadays, 8.0″ is the standard but as a heavy rider, you want something that can take a punch. Go with an 8.5″ deck, this is (in my opinion), the best choice for tall skateboarders or heavy riders.

Do you break decks every other week, or too often that it hurts your wallet? Go with a fortified deck. You have a couple of options here but there’s only one that really stands out, it comes at a price though.  There are a couple of brands that have stronger decks and prices vary a lot. The most expensive one goes for around $200 and the cheapest is about $60. I’ll list a few here and explain why they are stronger than average.

Many of them have an extra layer of fiberglass to support extra weight. This has a few advantages but also some rather unpleasant side effects. Fiberglass can irritate the skin once it starts to wear. Splinters get under your skin which is rather annoying. Anyway, let’s see what’s out there.

Lib Tech offers decks with a mix of carbon fiber, fiberglass, and maple wood. What I like about these boards is how they make the sidewalls and tails stronger by applying birch. The center (or core) is laminated vertically and reinforced by fiberglass. Skaters seem to be pretty content and confirm the longevity and surprisingly long-lasting pop.  This is a good option for heavy or tall skaters.

Probably one of the better-known decks that can take a punch. The Powell Peralta Flight deck consists of 7 layers, 5 maple wood, and 2 fiberglass composite layers. They have great pop and are surprisingly light-weight. The epoxy infusion adds an extra dimension of quality and performance, you will have a hard time breaking this deck.

I own this one myself and got a few splinters just from holding it. I gave it away to a friend who didn’t have any issues so maybe my skin is a bit sensitive.

Another winner, this fiberglass enhanced deck is probably one of the strongest decks available. Now I haven’t been able to test this one out myself but the (real skateboarder) reviews are promising. It has a medium concave deck and might feel a bit stiff at the beginning, but this will go away once you break it in after a few hours. Like the other decks mentioned it has great prolonged pop, after a month of intense use it still performs at peak efficiency according to the reviews.

The biggest pro of this deck is its price, it’s about $50, which is way cheaper than the previously mentioned decks. Its tail and nose don’t chip as much as other decks, still, it can’t beat the Lithe slate 2 or the flight deck in durability.

P2 decks consist of a thin maple core and are reinforced with Aramid Fiber which is inserted on top. This results in a stiffer and stronger nose and tail and longer-lasting pops.  Some don’t like the shape of the nose as it deviated from the standard. Don’t expect miracles, the tail can still chip and the board isn’t unbreakable. I have not tested this technology so it’s hard to say if they last longer.

There are a couple of brands that use P2 technology:

Dwindle Impact is another creative technology. Dwindle (woodshop) reinforces the area where you attach your trucks. The basic impact version has two carbon discs at the bottom of the deck which helps to absorb impacts more efficiently. It is a bit heavier due to the 8 layers of maple wood, regular boards have 7 so this might take some time to get used to.

The light version consists of the regular 7-ply maple wood construction. Another trick to make it stronger is the die-cut carbon fiber laminate which is inserted on top of the deck. The example above is an impact light deck which I bought from my local Dutch skateboard shop called SkateboardPlanet.nl, I was lucky to get the last one, this board is rad!

Impact plus is reinforces using the carbon fiber discs and an extra carbon fiber layer on top of the deck. It might be worth checking out.

Impact plus features 8-ply of North American Maple and 2 carbon fiber discs at the bottom. The plus has to do with the extra Die-cut carbon fiber laminate inlay top of the deck. Dwindle decks are totally worth it if you’re a deck breaker.

Brands that use this tech:

This is the winner and I already did a piece about this a while ago. The Lithe Slate skateboard deck is the best board for heavy riders that break decks occasionally. It has about everything you want from a deck.

Lithe Skateboards uses a unique inlay construction which keeps the deck strong and prevents the (unique blend of) carbon composite from fraying. No skin irritation or splinters! This keeps the boards strong, but also eliminates sharp dangerous fraying that all other composites boards get. This deck is unmatched but it comes at a price (almost 200 bucks). Keep an eye out because I’m going to review this board soon. 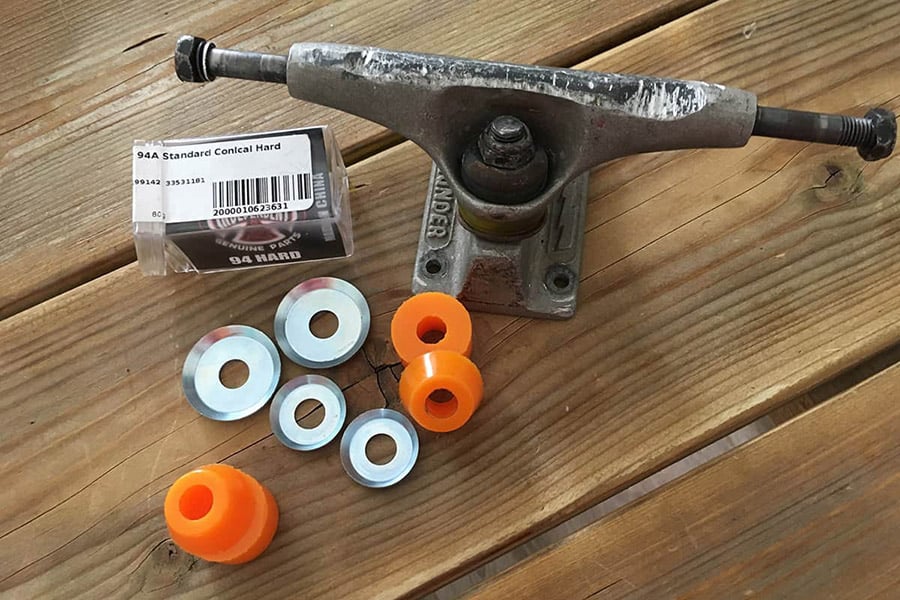 Stock bushings are fine in most cases. When you are a bit heavier you need a set that can handle your weight. The polyurethane can get damaged if it suffers a lot of impacts or just feels very loose even though you tightened your trucks to the max. Check out this table below to see the hardness you need according to your weight:

Stick with known brands like Independent, Thunder, Venture, Tensor and Grind King. Cheap trucks won’t last long, especially when you’re a bit heavier than your average skater. Replace the bushings if they feel too loose, but break them in first to be sure.

Everyone prefers their own brand so I’m not going to recommend anything here, just stay away from the cheap stuff!

I’ve selected a setup with parts that can take a beating, note that you can swap components around, this is just a suggestion. First of all, I recommend going for a Powell Flight deck, as mentioned before these decks are very strong and won’t snap easily. If you’re bigger or heavier than average this will be the perfect deck.

I picked 53mm, 99A Spitfire Wheels which are great for street and also allow for transition skateboarding. Standard Bones bearings which every skateboarder prefers (including spacers) and Independent trucks which are about the toughest trucks on the market. All components are compatible.

Heavyweight skateboarders should pay extra attention to the quality and technology used in decks and the hardness of bushings. There’s just one thing you suffer more than those lightweights, it’s called gravity. The heavier you are, the harder you fall. You don’t need a really expensive board, check out my recommended completes if you don’t want to assemble one yourself.

If you’re a beginner consider wearing some protective gear that deals with the impact instead of your body. A hard slam can mean the end of your skateboarding career or at least sitting on the couch for a couple of weeks.

This concludes this series, also check out:

I 'm an aged skateboarder, but I still shred responsibly. I started skateboarding 25 years ago and I'm out there whenever I can.

link to What Makes a Good Skateboard? Not All Boards Are Equal

Skateboard Decks come in all shapes and sizes, all kinds of colors and widths, and can be made of different kinds of materials.  Basically, a good skateboard is made of 7 ply Canadian Rock...

This skateboard configurator is a guideline and not hard science. Make sure to read the rest of the article to make an informed decision. In order to get the right setup, you need to think about...

Hey, thanks for dropping by! My name is Ruben and I've been skating since I was a kid. SkateboardersHQ is about spreading the love of skateboarding written by real skateboarders.