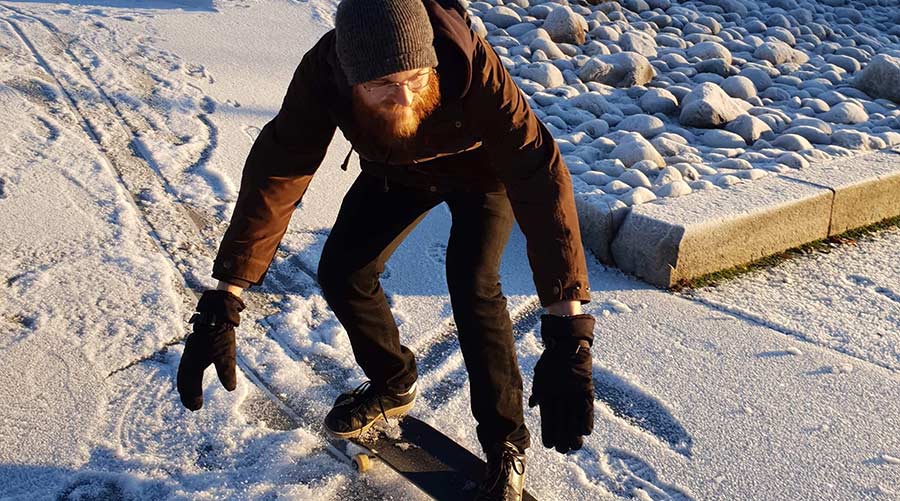 Are you more of a nature enthusiast or a street addict? Do you prefer to quietly skim through the snow or hear the sound of your wheels rolling over the concrete? Whichever you prefer, a question subsist: Is Snowboarding the same as Skateboarding?

Even though Snowboarding and Skateboarding share many similarities, they are not the same. Even if some of the skills you learned on a skateboard can transfer when you step on a snowboard, and vice versa, the two practices stay well distinct.

Let’s dive into what snowboarding and skateboarding have in common and where they differ.

Similarities Between Snowboarding and Skateboarding

Skateboard and Snowboard have some major common concepts that can help to switch up between practices. Let’s look at a few similarities that will help you to learn snowboarding faster, from my experience you pick up snowboarding faster when you already know how to ride boards.

Not just skateboarding, any sport will help you to get comfortable on a snowboard. Wakeboarding, (wind) surfing, longboarding, waterboarding (no not that one), they all will give you an advantage as a beginner.

In most cases, you’re going to adopt the same posture – or stance – on both skateboard and snowboard. Standing sideways to the board with your shoulders straight, the upper body contracted, while most of the work is performed by your hips and legs.

Both sports share the notion of regular and switch riding as well as the name of the two stances – Goofy footed and Regular footed.

Skateboarding and Snowboarding share a lot of tricks in common. Although they both have their unique tricks, most of the basics are the same. Here is a list of the main ones:

Although I’ve heard a lot of people say turning on a skateboard and a snowboard is different, I would argue the opposite. When you think about it, they’re effectively the same movement at various intensities.

Let me explain. While on a skateboard, you’re barely leaning to turn, you’re still leaning toe side to go frontside and heel side to go backside. It’s the same on a snowboard, except you’re leaning so much that you stand only on your toes and heels.

Differences between Skateboarding and Snowboarding 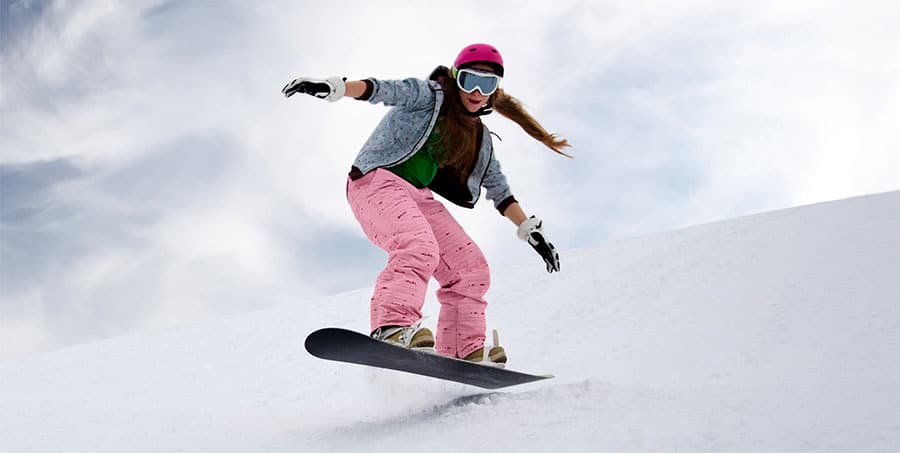 As two distinct sports, snowboarding and skateboarding have many opposed characteristics. Here are the main ones you will have to keep in mind:

Starting with the obvious.

Falling on concrete hurts a lot more than on snow. However, you’re more prone to injure yourself without anticipating it while snowboarding.

Most of the time, ski slopes are crowded with people and unexpected collisions might occur. Even more, if you like freeriding, you’re walking on shells. You have no idea what’s beneath you. The snow might cover up a sharp rock or some roots, just hope not.

Aside from the occasional passerby – and scooter riders, of course – you are aware of the danger that surrounds you when you skate.

Skateboarding requires you to hit your board – or pop – to jump off the ground while snowboarding is all about using the flex of the board to bounce. Same result, different impact.

With this in mind, snowboarding is easier on the joint in the long run as you won’t feel the repeated shock that skateboarding does on the body.

Another obvious one, having your feet attached comes with advantages and disadvantages.

It is easier to go fast and commit to tricks while being strapped to the board.

However, you can’t bail on a snowboard. Unlike skateboarding, when in doubt, you can kick the board mid-trick and land safely. With snowboarding, once you started the trick, there is no coming back.

Aside from the price of a snowboard which – for the cheapest ones – cost more than 4 times the price of a complete skateboard, snowboarding equipment (suit, goggles, boots, bindings, and gloves) is just way more expensive.

Still, the biggest expense is not even the material, it’s the cost of the transport and the ski pass you will have to spend each time you want to catch a session.

Skateboarding can be done anywhere and the vast majority of skateparks are free to ride.

Following the topic of money, let’s talk about effective practice-time.

Although I love snowboarding, I have to admit half of the day riding is spent… well not riding.

Between the endless waiting line to take the chair lift, the wait on the slow drag lift, and the skiing school taking the whole track, snowboarding is not the most efficient sport. It’s part of what makes the charm of ski trips, but if you want to ride a lot and progress you will have to be patient.

The greatest thing about snowboarding has to be the speed you can attain while going down the slopes or jumping over fat gaps. You will never obtain that much hang-time nor speed on a skateboard.

On the other side, skateboarding allows for more creativity and freedom. It has a wider range of tricks (Shove & Flip tricks, No complies…), you can skate uphill and hit a lot more spots.

Is Snowboarding Harder than Skateboarding?

In the long run, I think Snowboarding is more accessible than Skateboarding for some precise reasons.

First off, falling on the snow won’t hurt as much as falling on concrete. In this sense, you might feel more secured and less scared to commit to tricks. Meaning you’ll throw yourself more and start progressing much faster as a result.

However, I genuinely think Snowboarding is harder to pick up at first. Especially when it comes down to learning how to curve.

While turning on a skateboard might not seem natural at first, navigating on a snowboard is a different beast. Especially when you’ve got to avoid the plethora of skiers and other snowboarders breezing down the slope.

Is Snowboarding Easy if You Skateboard?

Some of the best snowboarders started skateboarding but no one said t is easy. Of course, you’ll have a much easier time picking it up than someone who’s never ridden any type of boards before, but that doesn’t mean you’ll instantly become Shaun White.

Just learning how to properly curve and be comfortable on your board will take you some sessions. However, once you’ve mastered the basics, you’ll start learning tricks much faster.

Indeed, skateboarding helps a lot with park snowboarding. Grinding boxes, sliding rails, or taking kickers, are all things you’re used to doing on a skateboard. Transferring those skills on a snowboard should be quite effortless.

As previously mentioned, some tricks feel the same whether you do it on snow or concrete. For example, doing a backside 180 on a snowboard is no different than performing it on your skateboard.

Even better, if you’ve already tackled skating switch you might learn riding switch at the same time you learn regular snowboarding. Which will benefit you with any tricks involving landing fakie.

Is Snowboarding Harder Than Longboarding?

You can start on a mellow plane surface and build your way up to steeper downhill on a longboard. If you’ve never stepped on a board before, starting on a longboard might be a great idea.

On the opposite, you have to go downhill to snowboard. This can be scary in the beginning, especially when you’re not used to falling at all, even less repeatedly. I’ve seen many broken wrists among beginner snowboarders for this exact reason.

However, just like for skateboarding, longboarding tricks require a bit more precision than snowboarding ones, hence why they usually take more time to learn.

If you’re a snowboarder, skateboarding can be a great summer alternative. However, if you want to find the closest alternative, you might want to try out either longboarding, freeboarding, or even mountainboarding, which are all closer to snowboarding.

If you’re a skater, snowboarding can be a great way to switch up hobbies during the winter while staying in the same spirit as skateboarding. Nevertheless, if you’re looking for the closest alternative, you might want to try out a snow-skate, which let you have the freedom of skateboarding on the snow.

If you’re neither of those and don’t know which one you want to learn, start with what makes the most sense in your situation. Depending on your location and the size of your wallet, snowboarding can be pricey.

I’d suggest picking up any type of board and see if you enjoy it. No need to complicate things, go with a cheap one at first and upgrade it to a better one if you’re hooked.

I'm an aged skateboarder, but I still shred responsibly. I started skateboarding 25 years ago and I'm out there whenever I can.

link to Spitfire Wheels Review: Which Are Right for You?

Spitfire wheels was founded in 1987 by Jim Thiebaud. Also involved in creating most skate brands in the Deluxe Distribution such as Venture and Thunder trucks. The Californian wheel brand,...

Nowadays, skateboard decks come in many sizes and shapes. This can make the simple fact of picking your first board quite a daunting exercise. Especially if you don’t have a skate shop nearby and...

SkateboardersHQ is an independent blog run by real skaters. We test all products and try to offer an unbiased opinion.