I noticed there isn’t any in-depth review about the Powell Peralta flight deck and because Steve Cabellero is such a huge fan, I think it’s time to give you the low down on this deck. I have no idea how to write a huge guide about a 7 ply deck but I’ll try.

The Powell Peralta flight deck is lighter than anything I skated before, has great long-lasting pop, and feels really playful. Stiff, poppy, lightweight, and longer-lasting as long as you don’t use your tail to brake. Once it starts to wear, the fiberglass can cause your skin to itch.

It holds up to its reputation in most areas but the are a few minor caveats. I still think it’s the perfect street board but it comes at a price. Is it really worth the money or would you be better off with regular deck?

Note: As an Amazon Associate I earn from qualifying purchases.

Is This Truly The Best Skateboard Deck?

That remains to be seen, there is one board that outranks this one by far but it will cost you more than double. Fortunately they are working on a more affordable deck (Lithe Nex) which should be out soon. Since I haven’t been able to test this one, the Flight deck remains the most durable skateboard deck, for now.

It’s incredibly strong and the true secret isn’t the fiber, Steve Cabellero mentioned on The Nine Club it’s the glue. I can’t find out exactly what so specials about the glue but the guy in charge who developed the deck (either Stacy Peralta or George Powell, I can’t recall) mentioned it to him so that has to mean something right? These are secrets I can’t find out I can only judge this board by its performance.

Why is it Special?

It truly is one of the strongest decks currently available. While Powell-Peralta claims it can last up to 10 times longer, I would say 2-3 times at best. Truth be told, you’ll have a hard time breaking this board and is ideal for heavy skaters or board breakers. It truly sucks to snap a (new) deck in half but this is harder to accomplish when riding a flight deck.

It has great pop and doesn’t lose its snap or pop after extensive use.

The top layer is made of the triaxial fiberglass which looks pretty weird when you look at it for the first time. I’m used to maple wood, not fiberglass but it definitely has a coolness factor.

How does it hold up?

Pretty good so far, this deck has been skated for quite some time and it’s still pop-fresh. After skating this board close to 90 hours, it really holds up well. Still has a good pop and stays snappy.

I think they did a poor job with the graphics, it disappears instantly. If you want a longer-lasting graphic look at Plan B’s Black Ice boards but this is not about being fashionable. A deck looks nice until you skate it right? That first boardslide may hurt a little, but decks are meant to be destroyed.

The tail will last for a good while but isn’t razor tail resistant, it seems to last longer though. No signs of fiberglass splinters and if you treat it right the tail can last longer than average. I don’t think it really lasts twice as long, but longer than a regular 7-ply deck..

Eventually, it will develop razor tail as all decks do, just stay away from manuals if you haven’t mastered them and use and old deck instead.

We managed to snap it after using great force. At first a crack appeared but it was still skateable, after a few more tries we we’re finally able to break in in half.

Should You Buy It?

That is entirely up to you but I’m sure there are many people out there that will benefit from the toughness and appreciate the snappy and responsive feel this deck offers. After all, it’s personal preference and you might be able to pick up a few decent decks on sale for the same price.

Still, it’s a really though deck and made it to our list of best skateboard decks for good reasons.

If you have the disposable income, regularly break a deck, are older, and demand the best performance or break decks occasionally you should really go for it. It’s such a nice deck, poppy, snappy durable, and comes with great graphics. I really love how they look and definitely will give you that urge to go out and skate. 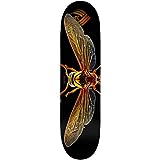 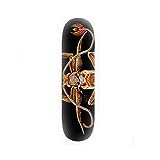 Even though the deck is about $90-100 you’ll earn that back if you snap board often. I think this is a great board for experienced technical skaters and skaters who want the best stuff. It’s a conversation starter.

Another pro is that it comes with a delamination warranty for its useful life (whatever may mean). There’s this one-star amazon review and this guy complains about not all holes being drilled (pretty weird) but that’s about the only negative comment I could find.  This board is very popular and the demand is increasing prices.

However, if Steve Cabellero loves this deck and won’t skate anything else, who are we to doubt a legend?

Check Stoked Ride Shop for the Flight deck, they are one of the few that currently offer a wide selection. Amazon also offers a few Flight decks.

When You Shouldn’t Buy

I bought this board a while ago and they went for around 70 bucks, I was shocked that they are so expensive nowadays, perhaps I got lucky but at 100 bucks it’s quite an investment for a skateboard deck. Powell-Peralta makes some bold claims and I’m not convinced it lasts 10 times longer than a regular deck.

Perhaps if you compare it to skateboard from Walmart or Target or one of those cheap blanks, but not compared to a reputable manufacturer. The fiberglass can be a dealbreaker for people with sensitive skin, you can get splinters once it starts to wear.

There are other durable decks that are cheaper so why the Flight deck? Do your research and make an informed decision when you buy.

Lastly, this board wears slower than others but once it does the tail will be vicious. The fiberglass will make it sharper compared to other boards and when it bites, you’re gonna have a bad time.

It’s not like Powell-Peralta is the only company that offers durable skateboard decks. In fact, there are many others. It just happens that they have been on top of the market for decades, a great reputation, and make great products. Here are some other options to consider.

Santa Cruz introduced the VX not too long ago which consists of 5 plys of maple and 2 fiberglass layers. Very cool board and I was glad I got one for myself. It has a bot more flex compared to a 7-ply maple deck, and is slightly heavier than the Flight deck (hardly noticable).

It also has more concave so it’s a good choice for technical skaters. Poppy and quality board that won’t easily snap. Still testing so expect a review soon.

Emillion offers long-lasting fiberglass enhanced decks which keep their pop and snappiness for a long time. These boards last longer than regular maple decks and could be an option. Medium concave and stiff decks which you need to get used to, but once you do you’ll love it.

Lib Tech offers decks using a mix of fiberglass, and maple wood. Hard to destroy these boards and great for heavy skaters or the demanding technical skater. These boards are hand made and consists of various materials carefully crafted into a quality board and claim to be eco-friendly.

Another option if you’re looking for something stronger than average. P2 decks consist of 6 maple layers and kevlar fiber on top. They also offer a 45-day guarantee in case you chip your nose or tail and you can return it if you decks breaks from boardsliding or disaster tricks.

Dwindle offers decks with carbon discs around the bolts at the bottom of the board. This absorbs most of the impacts and should make the deck last longer. They offer regular impact decks, Impact light and Impact plus. The plus has 8 maple ply’s and two carbon discs and A carbon-fiber top laminated insert.

We skated this board over 100 hours and it is one of the stronger decks for a decent price. No pressure cracks, just a few chips and it still has a few miles left. We moved on though, but this is a solid choice for hardcore street skaters.

It’s about time companies start pushing new technologies and develop decks that are longer lasting. Sure if your board snaps occasionally it might be good for business but you’ll ruin your reputation in the long run. I for one, welcome new tech as the industry has been in limbo for a long time.

Wheels, trucks, bearings, and bushings are getting better, so why not take decks to the next level? This is exactly what Powell-Peralta did and the skaters I talk to love the Flight decks. Do they last as long as claimed? I don’t think so, but if you are a deck breaker this will be a great investment.

It might take some time to get used to the snappiness or flex of this board but it’s a solid investment for skaters who break decks occasionally. It’s expensive, can’t deny that but it pretty popular and they are selling like hotcakes. Due to popular demand prices may vary. Give it a shot if you can afford it.

I'm an aged skateboarder, but I still shred responsibly. I started skateboarding 25 years ago and I'm out there whenever I can.

The Bustin Maestro is one of the most frequently recommended longboards for beginners, being one of the boards that started the trend toward using dropped decks as commuters (now commonly known as...

Today we have a special, SPECIAL, SPECIAL cruiser to review. I’m so stoked to tell you all about the Comet Cruiser! I had to wait for ages, it took quite some time before it arrived but when it...

SkateboardersHQ is an independent blog run by real skaters. We test all products and try to offer an unbiased opinion. Insta @skateboardershq