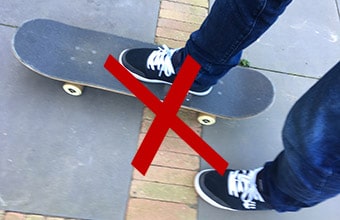 I learned skateboarding at a very young age and never considered my stance. I just assumed the way my feet were positioned was the correct way to push a skateboard. The first time I heard someone mention pushing mongo was a long time ago, I had no idea what it even was, to be honest. I found out later I was doing it wrong.

Why is pushing your skateboard mongo bad? It’s not just about style there’s more to it than looking bad. First of all, it takes you longer to position yourself properly. You have to move your feet around more compared to a proper stance. Second, you have less balance because your weight is on the back of your skateboard. This means it’s a bit riskier than a regular stance, less stability means a higher risk of falling.

It’s not hard to learn to push in a normal stance but it requires some patience. You don’t have to, it’s up to you but there are a couple of advantages pushing in a normal stance. Also, it isn’t all that bad, there are even some benefits to mongo stance so let’s see what the pros and cons are.

What Is Pushing Mongo

Mongo pushing means pushing your skateboard using your front foot. It takes more time to get into a proper position and you’ll have less balance because the center of your skateboard deck provides less stability. Proper pushing means you put your front foot near the front of your trucks (near the bolts). Then you use your back foot (and leg) to push yourself forward. Now for mongo, it’s a different story. It’s unclear where the phrase came from but you don’t have to have a wild imagination to know what it means.

You can see why this can cause problems with stability and reaction time. It takes a lot longer than getting into a normal stance. It’s not all bad, you can unlearn and there are a few advantages if you started out pushing your skateboard this way. It’s not only about the time it takes to get on your board, so let’s take a closer look.

The Advantage of Pushing Mongo

Let’s start with the advantages because even though pushing mongo is frowned upon, you’ll have a much easier time learning to ride fakie! You push mongo and then when you have enough speed you only have to place your front foot near the truck bolts and back foot on your tail. So now you’re riding fake like it’s second nature.

Riding switch will also be a bit less awkward in the beginning. You already push with your from foot so you only have to place your back foot a little more to the front of your board. Then you only have to put your front foot on your tail. Steering will still feel a bit odd but practice makes perfect.

To be fair, the benefits don’t outweigh the cons.

Pushing mongo isn’t very efficient there are a couple of disadvantages that aren’t always too obvious. You need quick access to your tail constantly when you push around. You need it to ollie, kickturn, hop cracks, avoid small rocks ,etc.

If you push regular this will be much easier because it just takes less time to get in the right position. You only have to have to take your back foot off and on your tail. Mongo requires a few extra steps and some can even be a bit risky. If it takes longer to get into a proper and stable position, you can’t deal far as fast with unexpected events. You have less time to react and you probably experienced this yourself already.

Also, weight distribution and center of gravity come into play. Your stationary back foot is between the middle of your board and tail. It makes the ride unstable and becomes more apparent at greater speeds. It’s also way harder to make corrections when something or someone is in your path.  you don’t have these issues when you push normal. Your front foot is placed near the bolts of the front trucks which give you much more stability.

Most skateboarders ride regular or goofy. Goofy means your right foot in front and regular means you push your skateboard with your left foot in front. Mongo pushers can be both regular and goofy skaters but just never learned how to push a board properly.

It’s just what you preferred when you first started skateboarding, maybe it was easier or felt more stable, in the long run, it’s going to catch up.

Even Some of the Best Pushed Mongo

Some of the most stylish and talented skaters started off pushing mongo. But while they started out as mongo pushers, they corrected their pushing problem. As a pro, you really can’t get away with pushing with your front foot and can make or break your career. Style is important and mongo looks weird.

Bill Danforth is probably the most infamous mongo pusher and was also notorious for his pumping style. He was also called ‘the Nomad’ and older skaters sometimes still refer to his style and call mongo pushing ‘pushing Dan’.

Randy Colvin’s part in Two World Industries Men (1990) clearly shows his mongo pushing style. Even though he showed some gnarly skating, it’s just strange to see a skater at that level push with his front foot. Fakie nose grinds of rails, wallride to nollie are things you don’t expect from a mongo pusher. I don’t think you can get away with it this day, but the stuff he showed in the early 90’s was impressive.

Probably one of the most surprising names on this list is Tom Penny. Tom was a mongo pusher when he started out. There is supposed to be a video somewhere which shows him pushing with his front foot, can’t find it, unfortunately. Tom is a legend and soon corrected his stance.

Chris Cole? For real? Yeah, even Chris Cole started out pushing using his front foot. Chris is one of my favorite skateboarders, not just because of his mad skills but he’s just a great guy. In the documentary Motivation 2, Jamie Thomas noted that he once told Chris to start pushing like a regular (or goofy) skateboarder if he wants to advance his career.

If you don’t feel like learning to push in a normal way, that’s fine! I get that sometimes you can feel pressured by your peers and people heckling you for riding mongo. I pushed this way for years and nobody cared at all, at least where I’m from. Nobody thought there was anything wrong with it, just a bit different.

I decided to do something about it because I just wanted to ride more efficiently and noticed I had trouble keeping my balance in confined spaces. I’m glad I did though! Also, even some are pros switch between mongo style and normal.

If people give you crap about your pushing style it’s probably best to ignore them, you do you! It’s just like that mall grab thing, nobody cares except for posers. Seriously, why do people care? As far as I’m concerned you go ride the streets in your Trasher shirt, pushing mongo and when you’re done grab your trucks to carry your board around. Don’t change your style just to fit in.

How to Stop Pushing Mongo

I used to push mongo because it was just the way I learned to skate as a kid. It never occurred to me that it’s a terribly inefficient way to push a skateboard. I forced myself not to push mongo, constantly repeating that to myself when I did it again. It’s not easy to get rid of something that’s so deeply wired into your brain. So how do you stop pushing mongo?

I started by just cruising a smooth street or pavement, this way it made it a bit easier to focus. It was hard at first because it just felt unnatural and it was very awkward. I felt I looked like a beginner and was a bit embarrassed to be honest. It didn’t take very long before it got better. One thing that helped was to lean on my knee with my hand, somehow it made me feel more comfortable.  In short, here’s what to do when you want to stop pushing mongo:

You’ll soon reap the benefits when you visit your local skatepark. After a while, you don’t want to go back.

Pushing mongo has a lot of disadvantages but you shouldn’t change your style because people don’t like how it looks. Do it for the right reasons and start practicing. You’ll be pushing ‘normal’ in no time depending on how long you’ve been doing it.

Now if you want to become a pro, you really should stop pushing with your front foot. Some got away with it in the early 90s, but those days are long gone. Skateboarding has come a long way since then and the rise of Instagram and Youtube demand that you skate with style or you can forget about a following.

As for me. I can still ride faster when I push mongo and it probably is because I did it for a very long time. I don’t regret relearning how to push but it was a bit embarrassing sometimes. Nowadays I ride fakie like a boss, so there’s that!

Honestly, there is no such thing as the best shoes for skateboarding, it all depends on personal preference. Sure, there are shoes that last longer than others; some provide more board feel and make...

Even though skateboarding has a careless reputation associated, in reality, it’s actually quite the opposite. Skaters need to take care of their body and mind. To perform at the best of their...