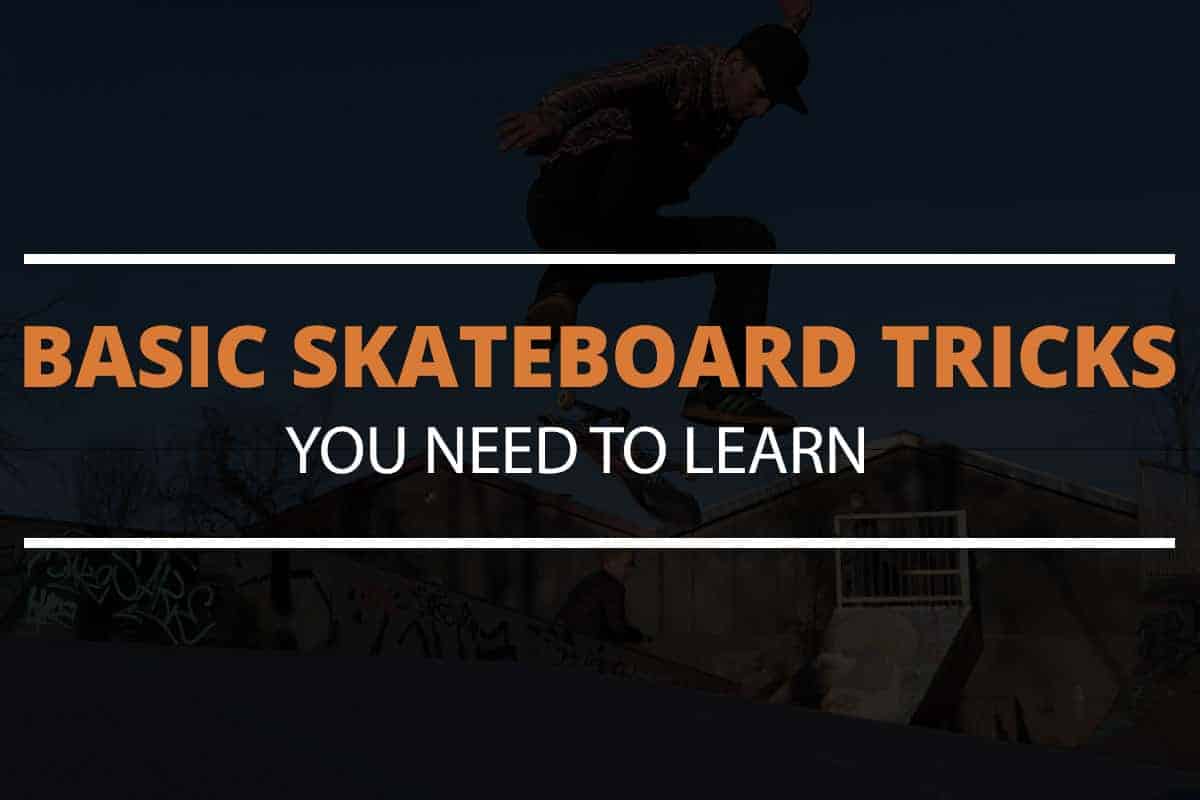 If there is a question I get asked a lot by new skaters, it definitely has to be “what trick should I learn next?” – aside from the usual “can you 360 flip?”

The fact is, there is no right or wrong answer to this question. Skateboarding has no rules. Therefore, you choose which trick you want to focus on, and which ones you’d rather skip. It varies depending on the person, its ability and its bag of tricks. We all have tricks that come more naturally than others.

Starting at the basics is important because they are fundamental if you want to progress fast. Trying to kickflip on day one usually won’t help you to learn how a skateboard responds or behaves. If you can ride like a boss, you’ll learn tricks much faster.

If you’re still on the early phases of skateboarding, and yet to land your first kickflip.   So let’s go thought 10 basic skateboard tricks that are challenging, but doable (with enough practice). Some might come natural and other will require you lot’s of tries, it’s all part of skateboarding.

The Backside 180 Shove It, or Shove-It consists in a 180° spin of the skateboard on its horizontal axis. The key to any shove trick lies in the scooping foot. For the regular shove-it, place your foot on the front edge of the tail with your toes hanging out and push back your foot behind you.

I’ve put the Shove first on the list because doing a proper shove-it is easier to perform than a decent ollie. Start by scooping the board standing still while following it with your front foot. Once you can complete the full motion consistently, all you’ve got to do is jump higher and put your back foot on. If you want more tips, I’ve written an in-depth tutorial over here.

The Ollie revolutionized skateboarding when it first appeared in the 1970s. Invented by Allan “Ollie” Gelfand, the trick allowed skaters to jump over obstacles without using their hands, or stepping out of their board. The Ollie led to the new era of street skateboarding. Rodney Mullen, pioneer of street skateboarding, used it as the basis to invent every flip trick you can see today.

Put it simply, the Ollie is the action of jumping with your board stuck to your feet. To perform the Ollie, you want to snap your tail on the ground while rolling your front foot on the grip tape towards the nose. All this while jumping.

This trick takes time to master. So don’t get discouraged if you can get it consistently during your first few months of skateboarding. The amazing thing about Ollies is that they’re so omnipresent in any tricks that you’ll polish them all throughout your skateboarding journey.

Beside its unconventional name, the Boneless is in fact a pretty simple trick. It consists of grabbing the board with your back hand (left hand for goofy footed, right one for regular footed) while your front foot steps out the board and you jump off of it.

To make it easy to learn, you can break it down into its three steps and practice them individually: bend your knees to grab the deck in the middle; put your front foot on the ground; jump and put back your foot before landing.

The boneless is one of the few old school tricks still popular to this day. Back when the Ollie wasn’t a thing, skaters used to boneless to go up sidewalks and down gaps. Nowadays, riders mostly do them on banks and transition.

The Pop Shove-It is a combination of the Shove-It and the Ollie. The board does the exact same motion as a Shove It, except all four wheels lift off the ground and you catch the trick at its peak with the front foot. Like for a regular shove, your back foot does all the work. The difference is you want to pop first and then scoop as soon as you hear the snap of your tail.

It’s the first trick you’ll learn that combines both the concepts of scoop and pop. You’ll find the same back foot motion in a lot of more advanced tricks like varial flip, 360 Pop Shove-it and 360 flip. If you struggle to complete the full rotation while rolling, you could give fakie shove-it a go before learning them in regular stance.

Now that you’ve got your Ollies down, time to learn your first rotations. The best starter trick has to be the Frontside 180. Performed by doing an ollie while swinging your hips and shoulders in front of you, it causes your board and body to spin 180° at the same time.

I’d recommend starting learning them directly rolling. Rotations are typically harder to perform standing still. Speed helps to gain the momentum needed to complete the full 180. Although, you will probably learn them by pivoting before being able to do the full rotation.

The Half-cab takes its name from its creator, pioneer and long-time pro skater, Steve Caballero. He was the first person to land a fakie backside 360, nicknamed caballerial, or full cab.

The Half-Cab, or fakie backside 180, is a great introduction to backside rotation tricks. Going fakie, you’ll have an easier time completing the rotation than with regular backside 180. If you have your fakie ollies down, start by pivoting fully at first to understand the shift of balance between your front and back legs.

The Fakie Bigspin is a trick where your board does a 360 shove-it while your body does a 180, all this going fakie. You want to adopt the same foot positioning as for a regular shove-it. Lean slightly more on your front foot and keep your upper body open, ready to turn.

If you have your half cabs and shove-it down, the trick shouldn’t take you too long to figure out. Going fakie helps to scoop the board 360, hence why Fakie Bigspins are much easier than regular ones.

The Nollie BS Shove-It has the same motion as a Regular Shove-It, except the deck turns around the front truck axle. To perform a Nollie Shove, scoop your nose with your foot going straight in front of you, and jump at the same time.

The major difference lies in the foot positioning. Instead of having your toes hanging off, place your front foot in the center of the nose. Then push in front of you while jumping sideways.

Don’t get intimidated by its name. The Nollie Shove is an extremely simple trick. It’s the first Nollie trick many skaters learn, even before doing a proper Nollie. Once you’ve understood the motion, the trick becomes even more effortless to scoop than normal shoves.

The No Comply 180 is the second old school trick of this list still relevant today. Its name came from the first riders who could do the trick but didn’t comprehend it. No Comply. The trick resembles to a Frontside 180, at the difference that you put your front foot on the floor mid-trick. In practice, it’s much more like throwing a Frontside shove it in front of you while using the ground to jump back on it.

The key thing that helped me learn this trick was to put lots of pressure on the back foot. So that when you take the front foot off, you get a solid and quick snap.

Like the boneless, you can break the trick down into its 3 simple steps to learn it easily. First, put your front foot on the ground while staying with most of your weight on your back leg. Second, hit your tail as if you were doing a Frontside 180 and transfer your balance onto the front leg. Then, bring back your leg onto the front bolts.

The BS 180 comes as harder trick to learn than FS 180 for most people. Turning blindside is typically scarier, and it’s harder to maintain your balance in the air. Be cautious of slipping out during the learning process.

To achieve backside 180s, you need a decent ollie and the ability to do backside pivot from the nose. Then all you got to do is turn 90° and revert your way to complete the full rotation. By repeating the process, you’ll turn more and more until you do the full rotation without the revert.

I could have included many other basic skateboard tricks like Front Shoves or Nollies. But I feel like they usually come after the first flip trick for most skaters. Then again, everyone is different.

Experiment with tricks and learn the ones that feel the most comfortable to you. Also, if you can go to a skatepark, there are many other tricks you can learn in no time. Check out our other list of beginner-friendly skateboard tricks focused on curbs, rails and transition.

link to 15 Best (And Sickest) Skateboard Tricks of All Time

Skateboarding has come a long way since Rodney Mullen introduced what will become the fundamentals of modern skateboard tricks. To celebrate skateboarding, we're bringing you 15 of the best...

Now that you're comfortable riding a skateboard, it's time to learn some easy skateboard tricks. I don't recommend moving to ollies and kickflips straight away, although it's tempting. You need...